The outage that struck Facebook's apps on October 4 led consumers to seek out alternatives for social media and messaging, precipitating a surge in time spent among apps from the company's competitors. On the social media front, Snapchat saw the biggest increase as average time spent by existing users climbed 23 percent week-over-week during the outage, according to an analysis of preliminary Sensor Tower Usage Intelligence data.

Time Spent in Facebook's Rival Apps Grew up to 23 Percent 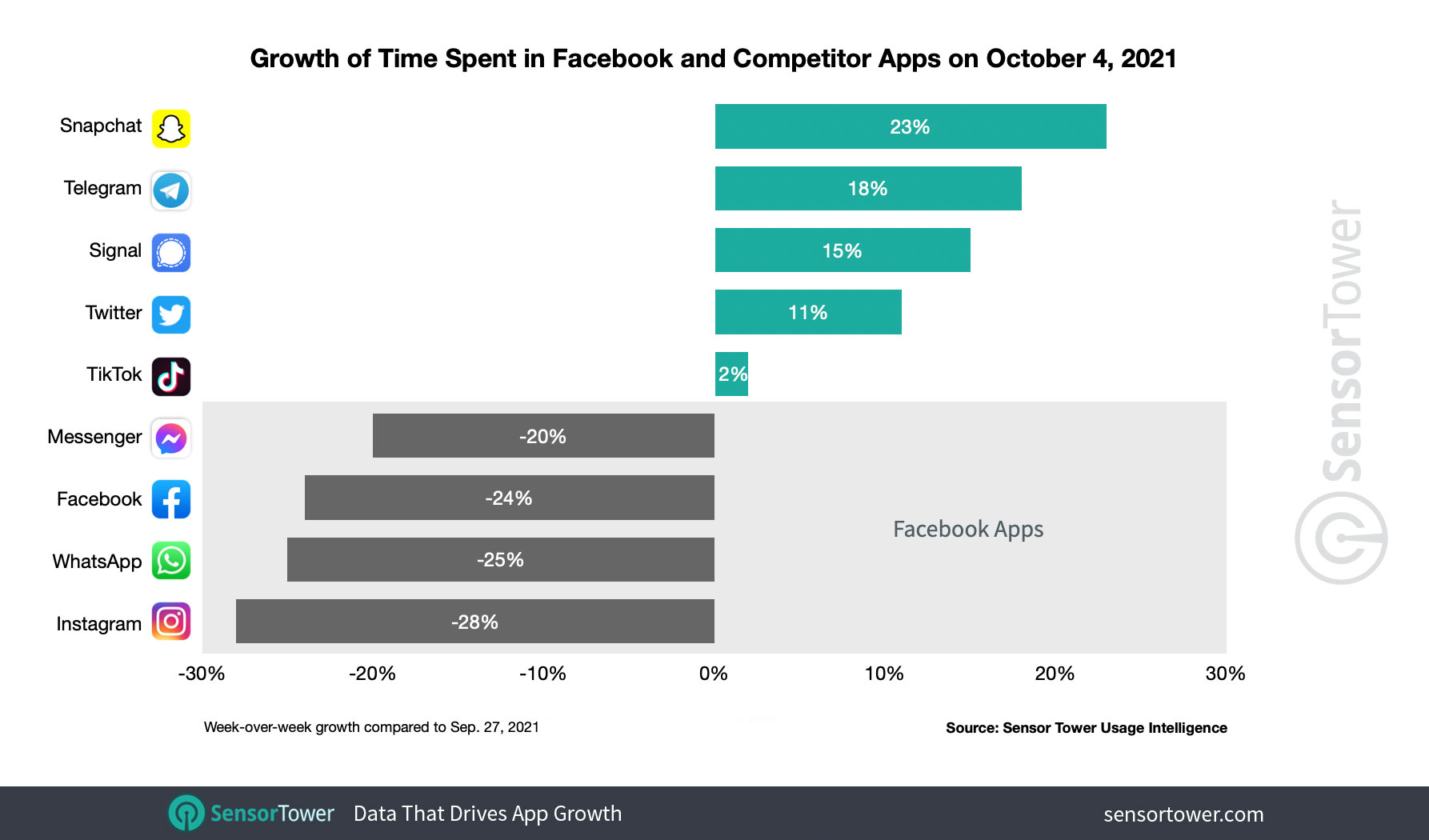 Unsurprisingly, the outage on Monday affected usage of Facebook's apps as a large portion of users couldn't access the services. Instagram's average time spent on Android to fall 28 percent W/W. Usage of Facebook's Android app fell by 24 percent, while WhatsApp usage declined by 25 percent and Messenger's by 20 percent.

However, this isn't necessarily an indication of a permanent shift in user behavior. Facebook's apps have proven to be resilient in the past, with WhatsApp's monthly active users remaining steady even despite the backlash earlier this year to its new privacy policy.

An analysis of the same cohort of apps focusing on the number of sessions among existing, daily active Android users worldwide showed similar trends, with Snapchat experiencing the most W/W growth. When comparing October 4 to the week-ago day, the app saw a 14 percent increase in sessions. Twitter saw 5 percent growth W/W while TikTok saw a dip of 1 percent. 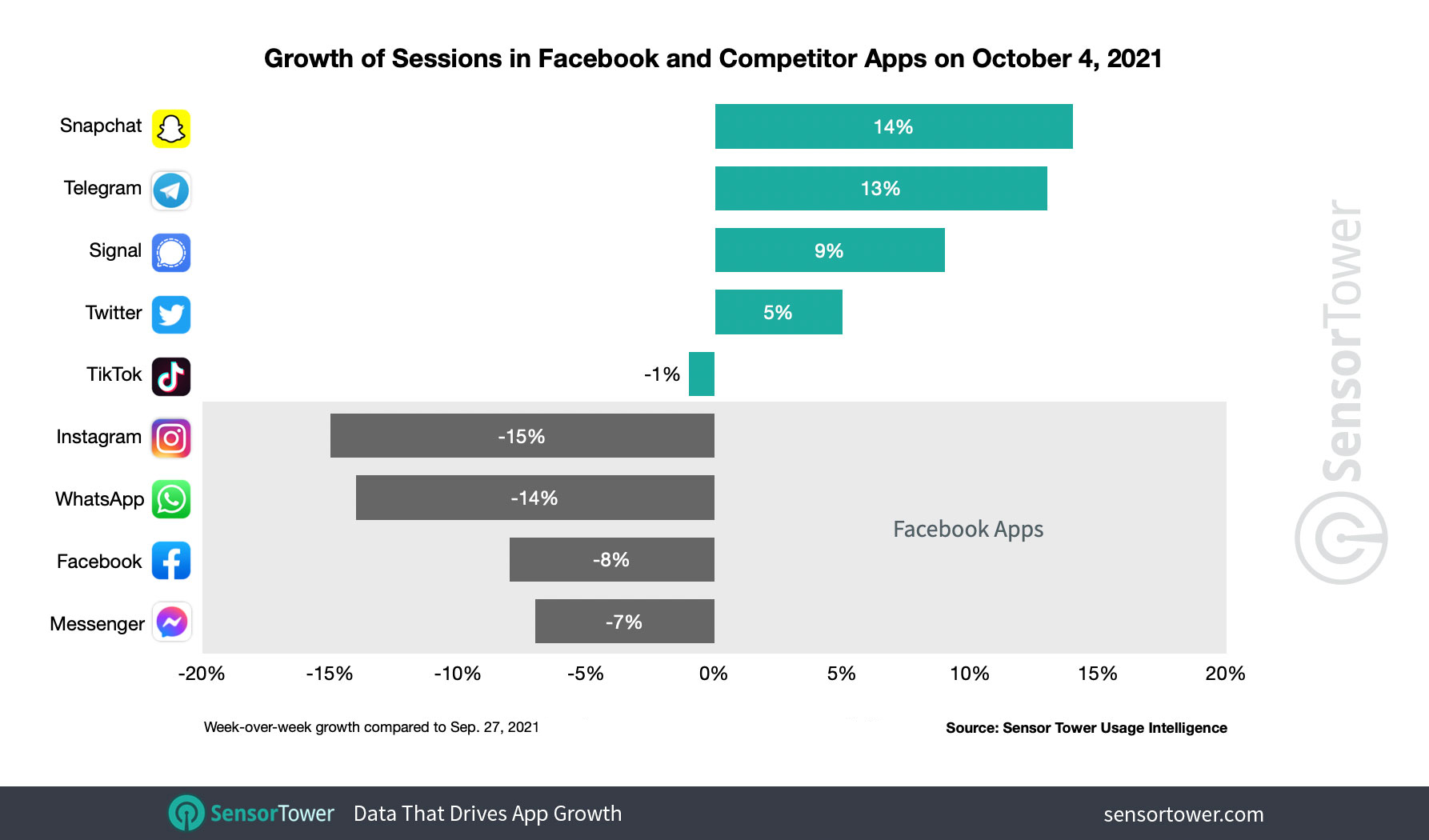 Facebook's apps saw a decline in session counts by existing users due to the outage, with WhatsApp falling by 15 percent W/W, Instagram by 14 percent, Facebook by 8 percent, and Messenger by 7 percent.

As a result of WhatsApp's outage, messaging alternatives such as Telegram and Signal saw a spike in adoption on October 4. According to preliminary Sensor Tower estimates, Signal's installs grew nearly 12 times from 74,000 worldwide on October 3 to 881,000 on the following day.

Viber experienced 630 percent day-over-day growth from 137,000 installs to 1 million, while Telegram reached 6.3 million on October 4, up 530 percent from 1 million on the previous day. 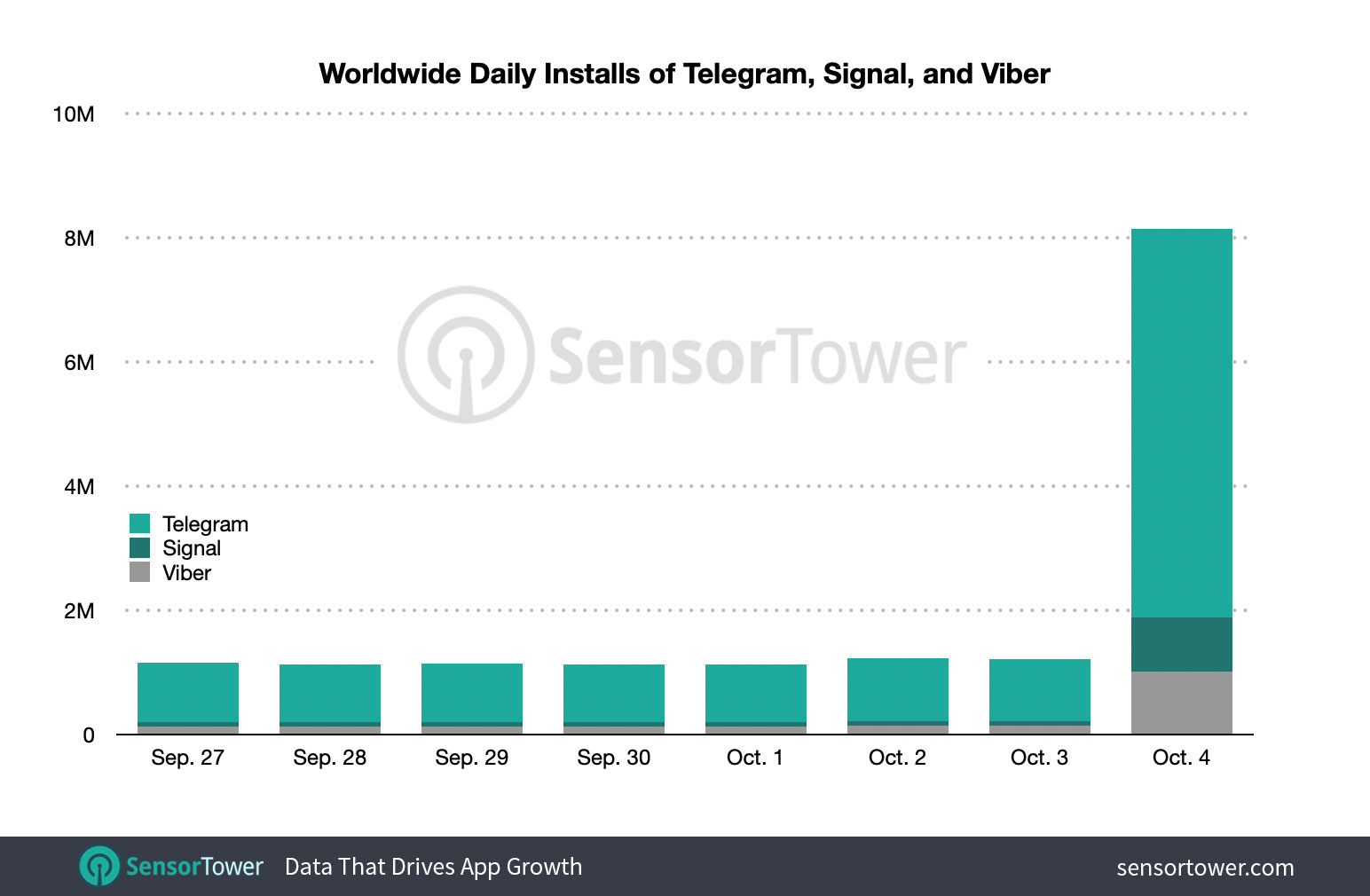 This analysis of preliminary data shows that messaging alternatives such as Signal and Telegram experienced a surge in user interest; however, the long tail effect of Facebook's outage has yet to be seen.