Bytedance's TikTok has had an eventful year, experiencing a record-setting first quarter and recently surpassing 2.6 billion installs globally across the App Store and Google Play. In addition to these milestones, it also saw the highest percentage of positive reviews among the top 10 most downloaded iOS apps in the United States during 2020, Sensor Tower App Intelligence data reveals.

The Best Rated Top Apps in the U.S.

In our analysis, we looked at reviews left by users on the U.S. App Store this year. As of December 14, TikTok has received more than 278,000 written reviews, approximately 246,000 of which were accompanied by five- and four-star ratings while about 27,000 had one- and two-star ratings. We counted three-star ratings as neutral. Using this methodology, 88 percent of the reviews TikTok saw this year were positive, making it the best rated top app on the U.S. App Store in 2020.

After TikTok, InnerSloth's breakout hit mobile game Among Us saw the second highest share of positive reviews with 67 percent of its nearly 57,000 coming with four- and five-star ratings.

Out of the top 10 U.S. apps, Disney+ saw the third greatest percentage of reviews, seeing 58 percent five- and four-star ratings out of over 9,000. 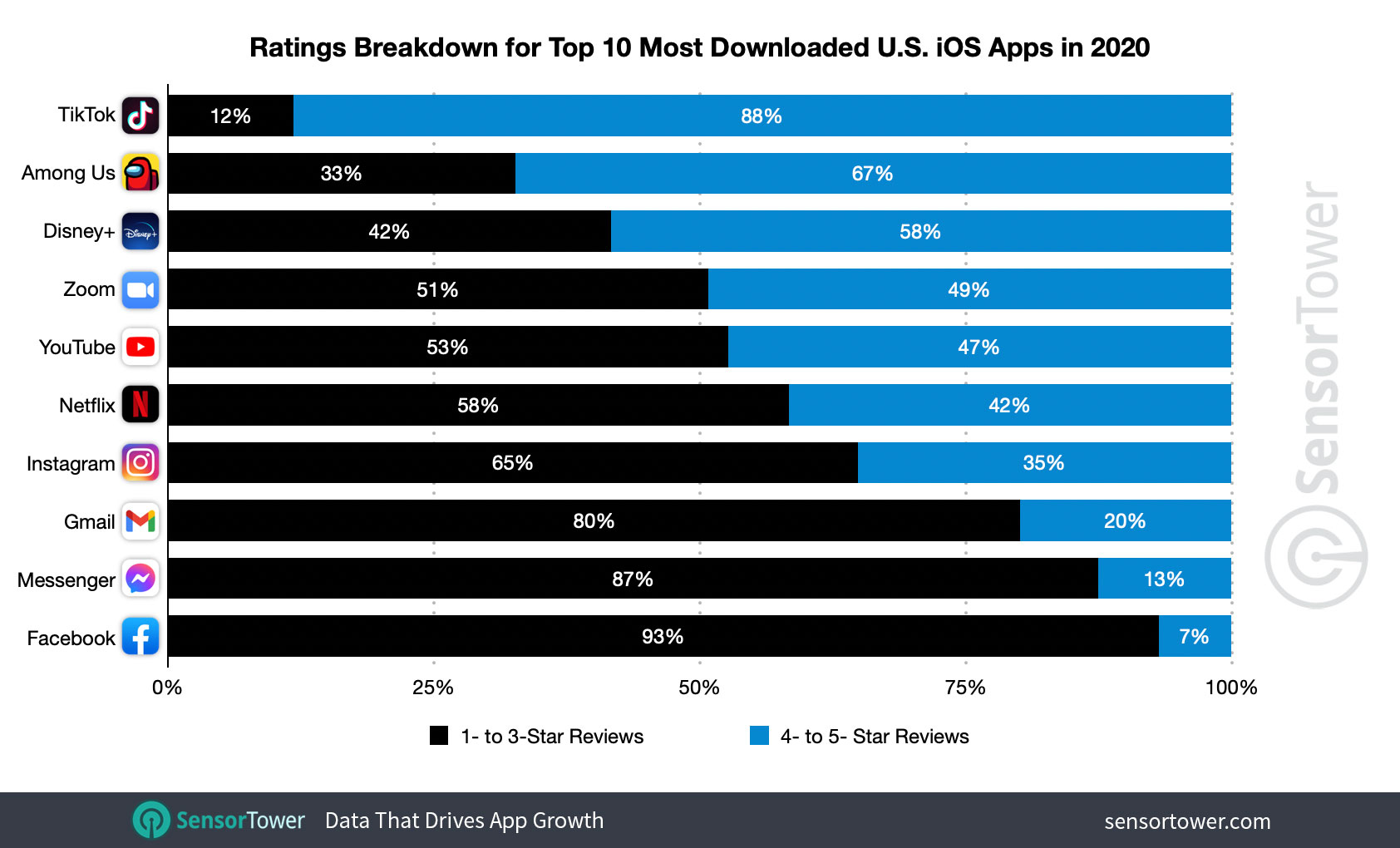 Twenty of the year's top 100 apps on the U.S. App Store saw their average rating improve between January to December 14 this year, perhaps due to efforts by their developers to meet the needs of new users. Categories that saw improvements included social media, such as TikTok and Snapchat, along with Games, Entertainment, Finance, Shopping, Music, and Social Networking apps such as Google Duo and Hangouts.

More Entertainment apps saw improvement in their average ratings than other categories, with YouTube's main app seeing the biggest increase. Although user sentiment for the app remains middle-of-the road, its rating jumped 0.09 from 2.66 to 2.75 stars. Tubi was the highest-rated of all Entertainment apps that saw an improvement in their ratings, starting the year with a 4.54 star average and reaching 4.55 as of December 14. 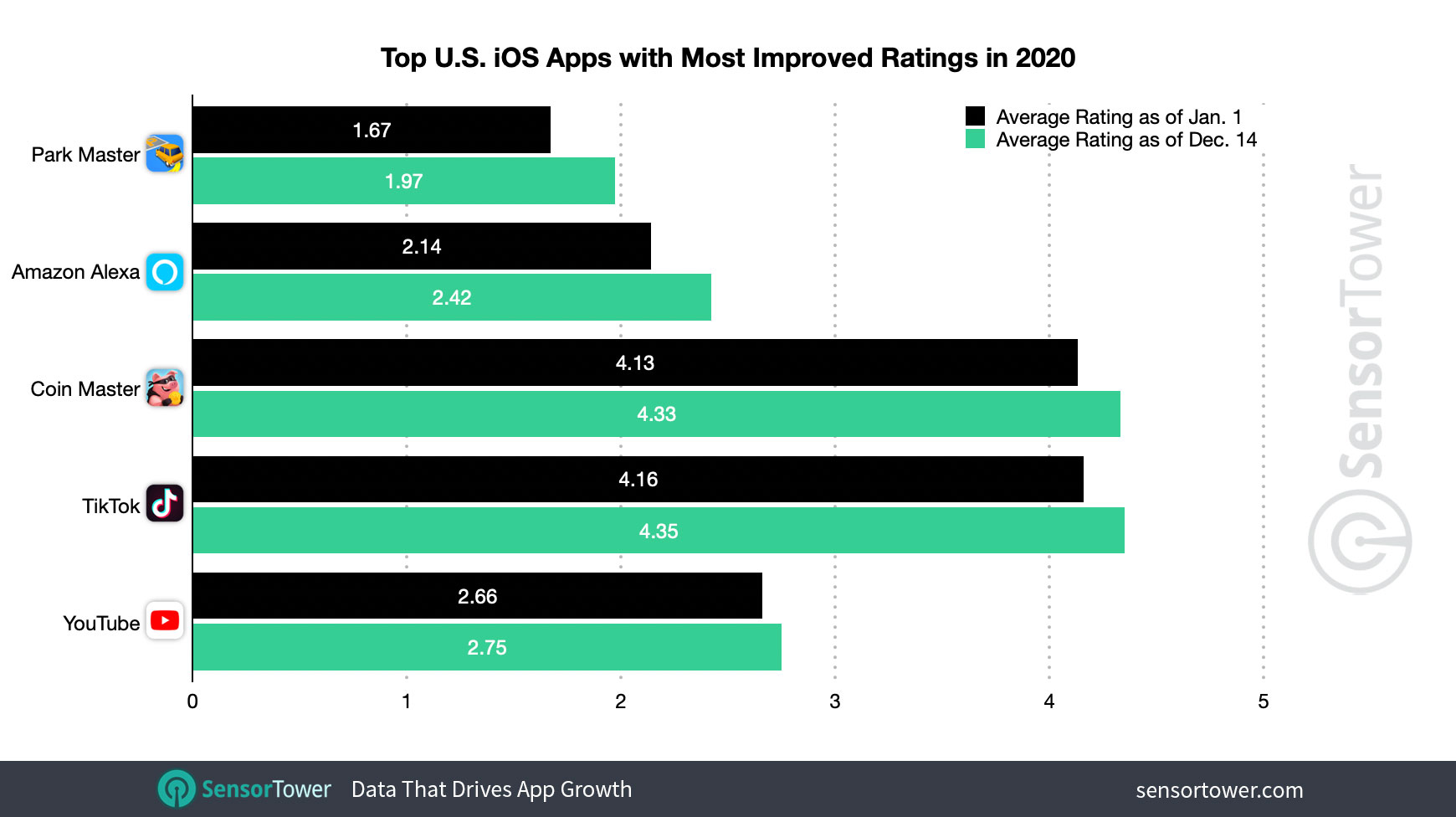 Mobile game Park Master from KAYAC saw its rating improve the most out of all top apps, though. Its average rating climbed 0.3 from 1.67 in January to 1.97. Among top non-game apps, Amazon Alexa saw the biggest increase in its average rating, climbing from 2.14 stars in January to 2.42 stars as of December 14.

Other mobile apps that showed a notable increase in their ratings this year include Moon Active's hit mobile game Coin Master, which climbed from an average of 4.13 to 4.33 stars between January and December 14. TikTok also saw its average rating improve from 4.16 to 4.35 stars.

The Year Reflected Through Ratings

The apps that have seen the most positive reviews this year are emblematic of the way mobile usage has trended in 2020, as consumers turned to their phones and tablets for entertainment following COVID-19 lockdowns in the U.S. and around the world. For most of this year, the mobile marketplace has seen a surge of interest in gaming and entertainment, and social juggernauts like TikTok have only accelerated their growth.

We'll be taking a closer look at how the mobile landscape has changed this year with our upcoming market recap, coming in early January.